Acclaimed landscape architect and University of Washington graduate Grant Richard Jones, FASLA, passed away on Monday, June 21, at the age of 82. He gained fame for his many innovations that shaped and broadened the practice of landscape architecture.

Grant was born in 1938 and raised in the Seattle area. After two years at Colorado College, he enrolled at the University of Washington in 1958 and graduated with his Bachelor of Architecture in 1961.  Although there was no department of landscape architecture at the time, faculty member Richard Haag influenced several of the top architecture students including Grant. Following graduation, he spent a year as a graduate student poet during Theodore Roethke’s tenure as a poet in residence at the UW. 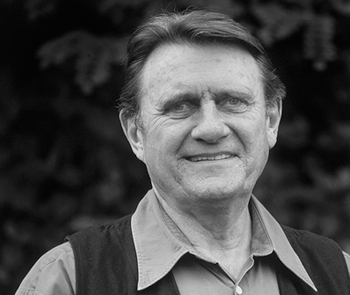 He went on to earn his Master of Landscape Architecture from Harvard University in 1966 and then spent the next two years exploring Europe and South America on Harvard’s Frederick Sheldon Travelling Fellowship.

After apprenticeships with Richard Haag Associates (1962-64) and Eckbo, Dean, Austin & Williams in Honolulu (1968-69), he returned to Seattle and established Jones & Jones Architects + Landscape Architects in 1969. He was a Senior Principal for more than 40 years, becoming Emeritus Principal in 2012. 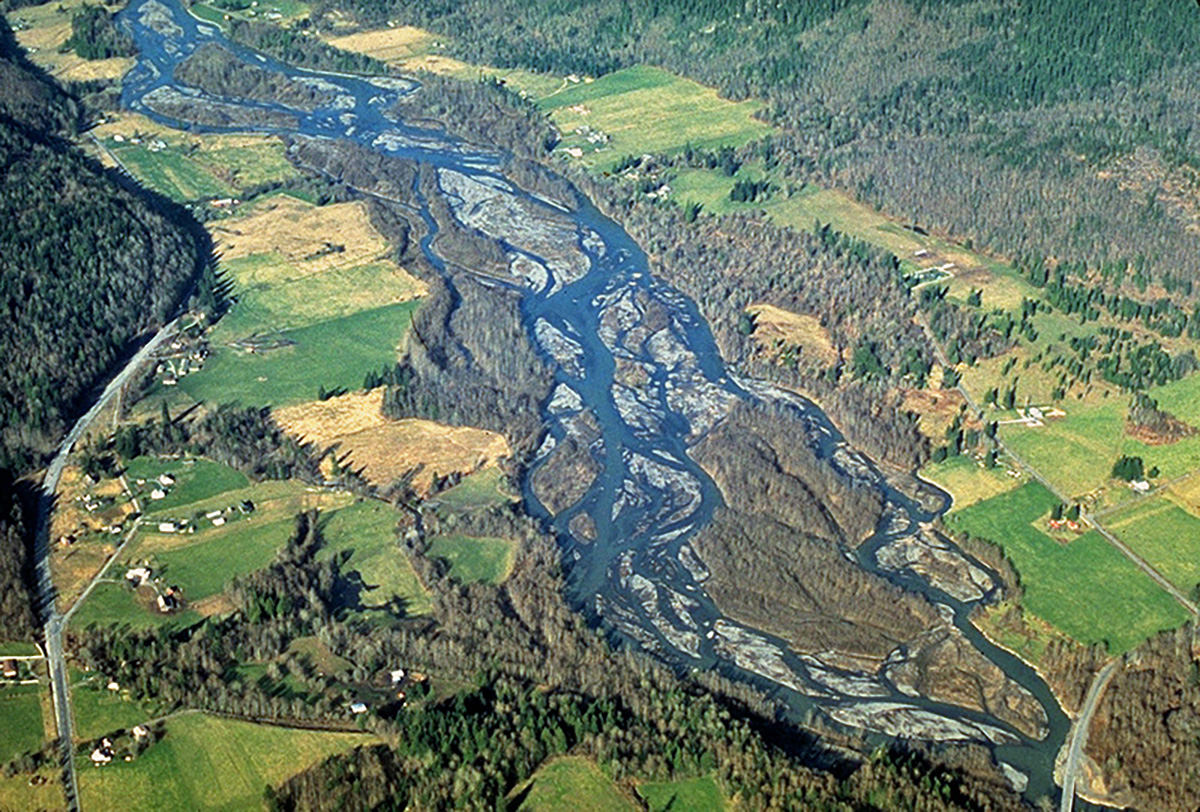 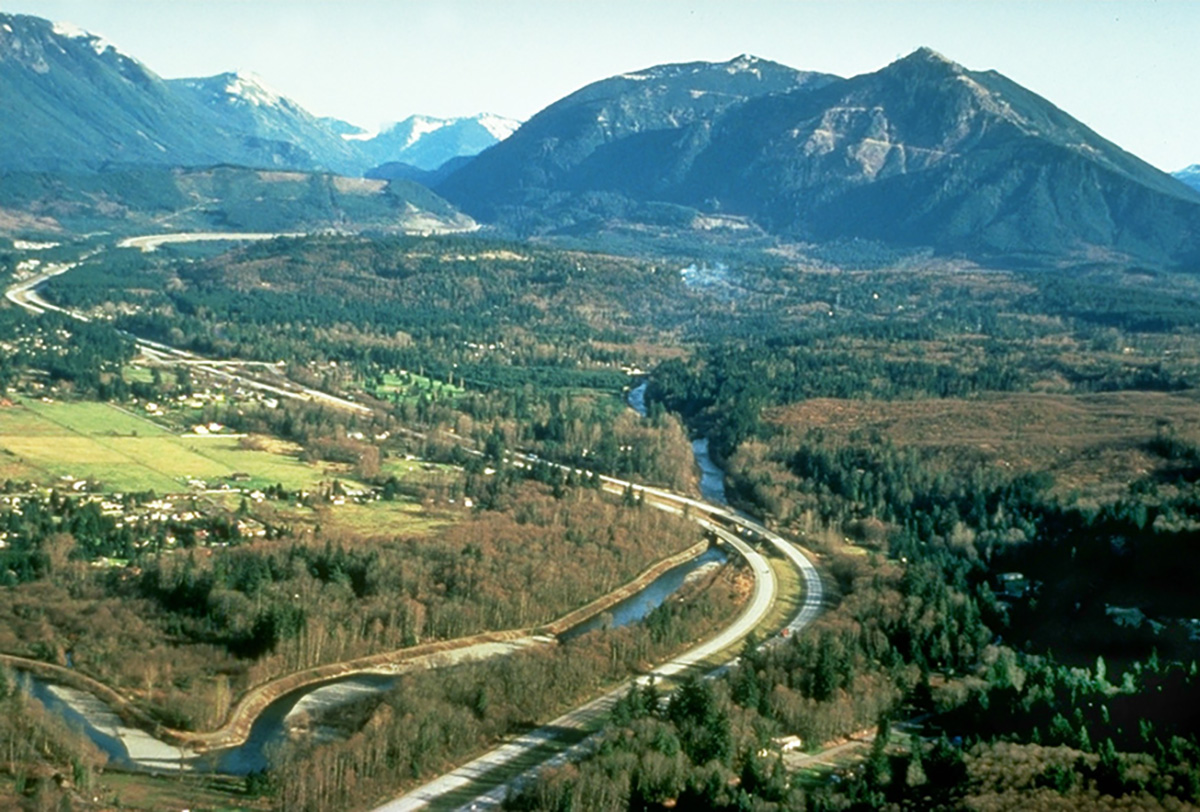 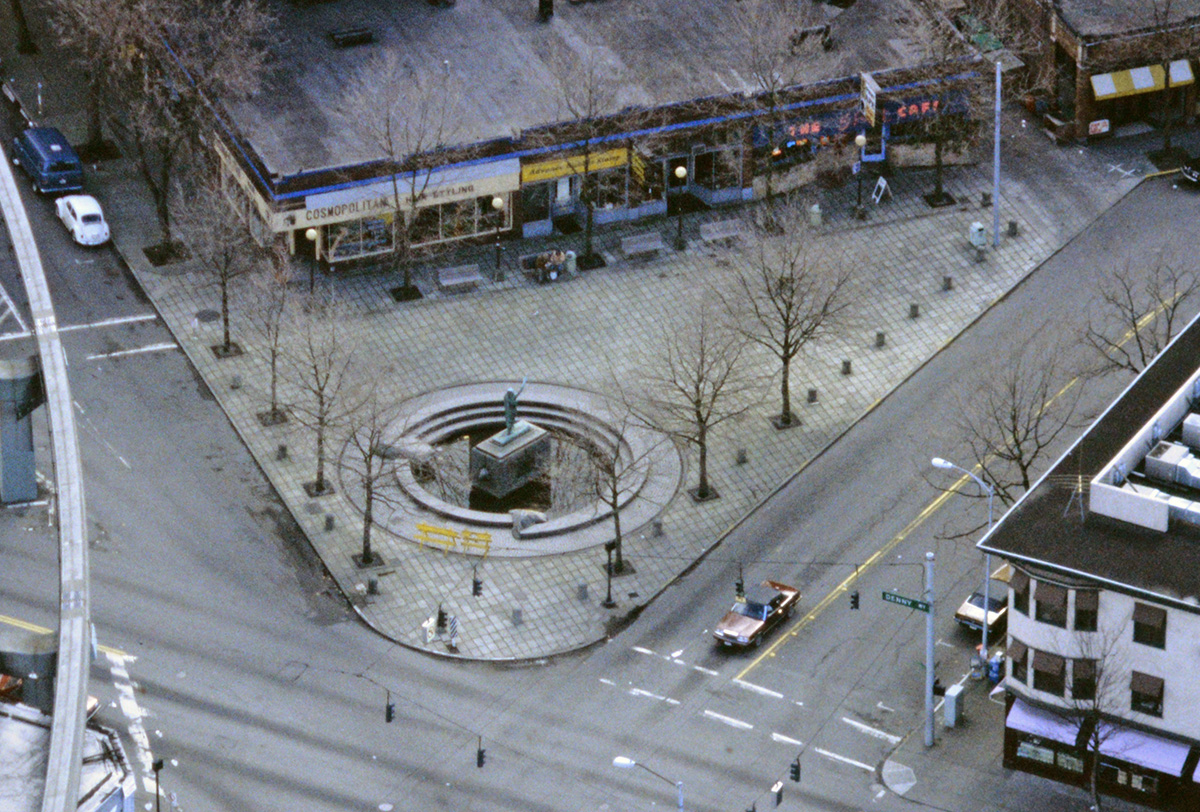 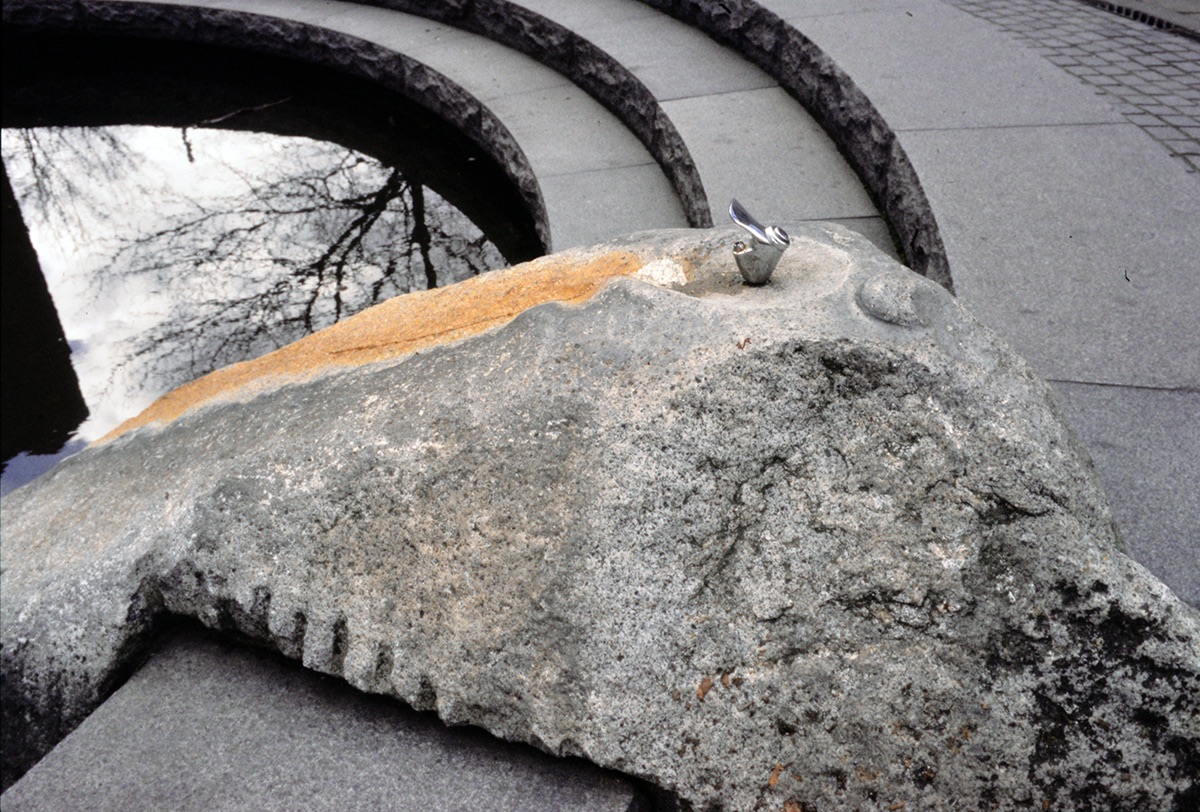 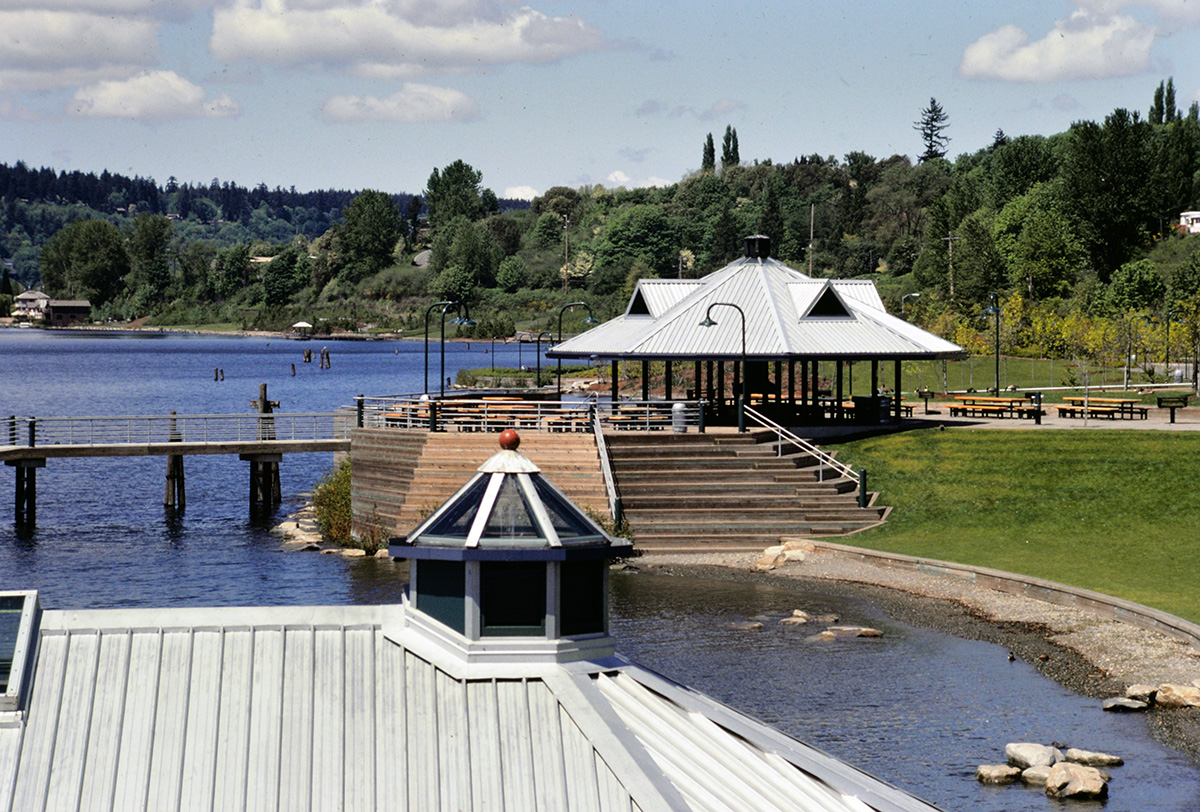 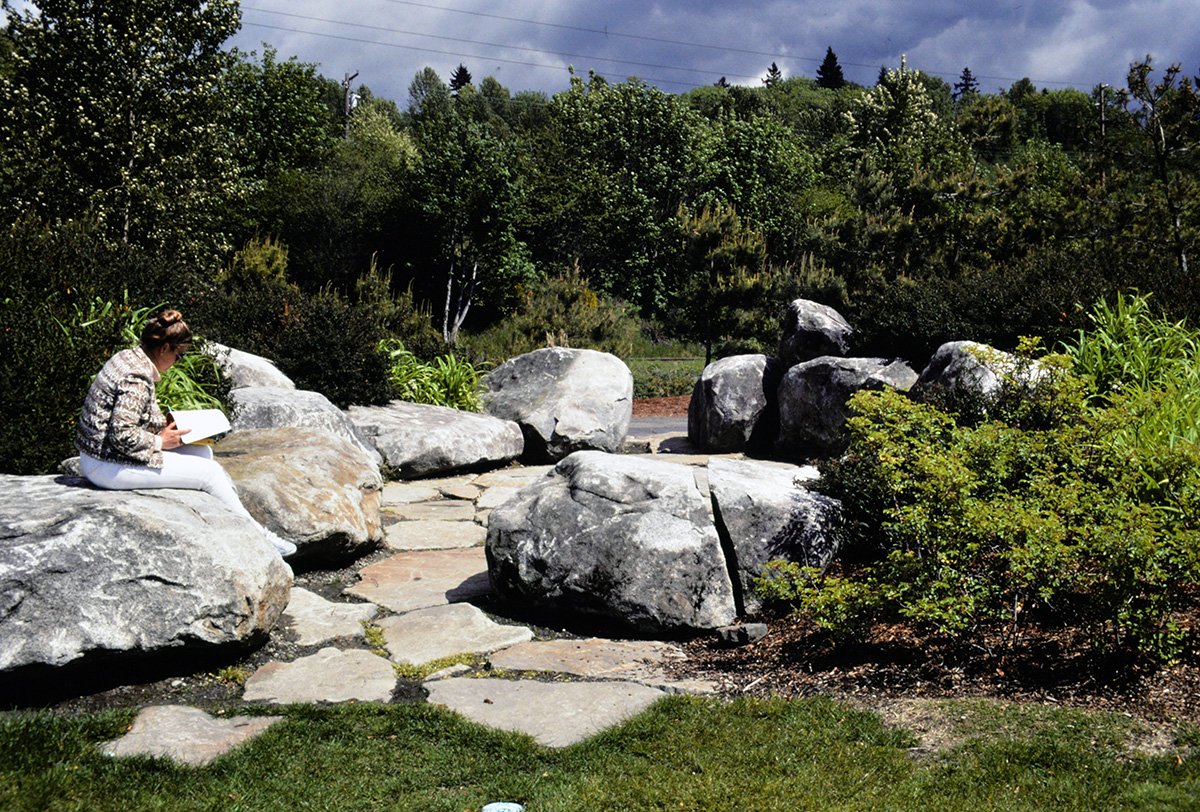 The Woodland Park Zoo Gorilla habitat was truly revolutionary by pioneering the idea that zoological exhibit design should be based in the animals’ natural habitats, with humans considered as guests. This idea became known as the habitat immersion method of design and it transformed zoos and similar institutions across the world. This kind of exemplary new thinking earned Jones & Jones a string of design awards.

Beyond the open door, shadows bend… 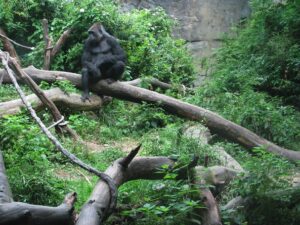 Whose ears hear water, near that tree
Who grew a stream.
Birds appear and disappear
My waterface makes friends
Whose eyes see clouds of wind in my hair.
What’s that hole?
Deepness doesn’t move.
Who are those beyond the leaves?
Take my hand.

Over his more than 40 years as a leader of Jones & Jones, Grant Jones shaped many of the firm’s most recognized projects. His creative approach combined the latest findings of scientific research with an intuitive sensibility that produced projects that have been characterized as examples of “landscape poetry.”

Throughout his career Grant wrote and spoke about landscape planning, ecological design, environmental design and other topics to a wide range of professional and academic audiences. He mentored numerous colleagues for whom Jones & Jones provided a post-graduate educational experience. He served as Director for the Landscape Architecture Foundation and he was a visiting faculty member at California-Berkeley, Harvard, Oregon, Virginia, Texas A&M, and Ohio State, and a longtime affiliate faculty member at the University of Washington.

Grant Jones was elected a Fellow of the American Society of Landscape Architects in 1980, and he received numerous other awards. In 2003, the Association selected Jones & Jones as its national Firm of the Year on its first offering of that award. In 2015, Jones was recognized for his outstanding contributions to the practice, theory, and sustainability of landscape architecture with one of the  College of Built Environment’s highest awards: the Roll of Honor. In 2016, the Landscape Architecture Foundation (LAF) awarded Grant the very first LAF Medal, an award that recognizes individuals who have made a significant and sustained contribution to the LAF mission of supporting the preservation, improvement, and enhancement of the environment.

A landscape architect understands systems and thinks across scales, sometimes with a dose of poetry. And there is probably not a better example than Grant Jones through his work at Jones and Jones. Grant was a visionary thinker, designer, and poet. The Woodland Park Zoo made habitats a key to zoo design. The plan for Paris-Lexington Road restored the ecological and cultural landscapes disrupted by the engineering of highways. The firm facilitated the participatory process and gave shape to the Mountain to Sound Greenway, a 1.5 million-acre landscape and an extensive network of trails for the public. Grant was even involved with a plan to turn the Korean DMZ into a “biosphere peacebelt.”

After years of knowing Grant, I finally witnessed his visionary thinking in action when he invited me and a few others for a meeting at Coyote Springs Farm in 2011 where he had settled after his retirement. In the years to follow, this was also where he would send his newly written poems to friends by email and social media posts. On the day we arrived at his cabin, Grant first took us on a tour of the landscapes in the area—his new neighborhood so to speak. We then joined a gathering of friends and neighbors in the evening. It turned out that the meeting was to talk about the making of a trail that would link the neighbors together who lived miles apart from each other. Garrett Devier (MLA 2007) from Jones and Jones performed a GIS analysis of the different route options.

The trail through the expansive landscape of Okanogan was a simple gesture but one creates a social fabric between rural neighbors while recognizing the power of the land and the ecological processes that shape it. It was the kind of visions that Grant has left us through the many pioneering projects that redefined the profession. He will be remembered for his visions and wisdom and the words that told us about his emotional connections to the land and what he had learned from it. The world has lost a very special soul who has made it a better place.”

The footbridge connects the house to the barn.
Sitting on it now, my feet
Like ducks in my creek,
Connect me to the North Pacific’s spinning gyre
Like a battery that turns the world.
It changes my tide four times a day.
Last night’s moon lifted fresh coconuts
Out of Wailua River on Kauai Island
And scattered them up Lumahai Beach to shade the
lovers.
I’m reborn every time I go to the barn.

Over the course of his career, Grant Jones made extraordinary contributions to landscape architecture, ecological design, environmental planning, and allied disciplines. His work, and the work of Jones & Jones, has truly had worldwide influence. He was an extraordinary leader, colleague, and mentor. We are saddened by his passing. 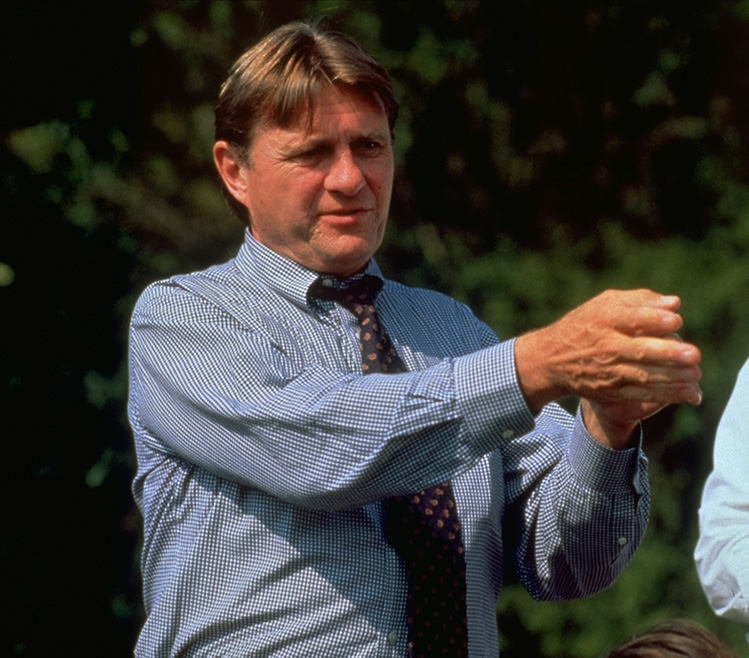 I’ve Been This Way All My life

I’ve been this way all my life;
I listened to rivers, learned to sing.
Sat with ancient cedars in the rain
Watched raindrops be rivulets in fissures of bark
Transposed, transfigured, transmigrated,
Transmutated,
Become a river.
It isn’t so easy to be a river.
Even though trees talk to you, widen your span;
And you whisper back under their arches,
People can’t hear you do this.
But birds seem to know.
Rocks breathe.
Peaks and mesas undress.
Talus blooms rare butterflies. Pikas whistle.
Mountains watch for signs of respect
To cry when ignored, even moan.
So I share what I know
With those who fly,
Swim, crawl and walk,
Sway, shimmer, sough and quake.
But those who talk out loud
Have lost their ears for this kind of music.
I’m a shaman,
Share what I see, what I hear.
I write poems as a way to converse without ridicule.
The land gives my inner voice,
Feels the weight of me out on the ledges.
The river covers my tracks in the sand.