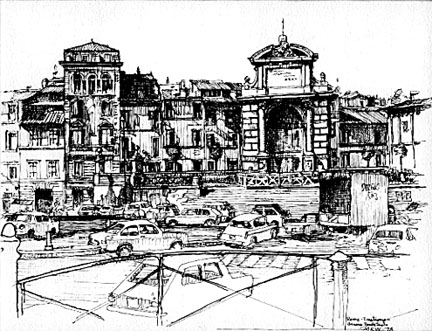 Myer R. Wolfe’s family established this endowment in his name to further his work in urban design at the University of Washington. The fund is used for professional, interdisciplinary purposes within the College of Built Environments, particularly the establishment of the lecture series and scholarship and thesis awards for outstanding students in the Urban Design Program.

Professor Myer R. (“Mike”) Wolfe was a Professor of Urban Design at the University of Washington from 1949 to 1989, and Dean of the College of Architecture and Urban Planning (now the College of Built Environments) from 1979 to 1982. He believed first and foremost in thinking about and creating good environments, and was one of the founders of urban design, an interdisciplinary field that includes urban planning, architectural and landscape design considerations. Professor Wolfe saw urban design as humanistic and working toward the good of our built environment. He felt the alliance of the design and planning professions was essential for the betterment of our environment and so, too, was constant questioning and even shattering of established beliefs about them. Professor Wolfe sought to expose planning and design to the social sciences, which to him were a necessary addition (though not a replacement) to concerns for the physical dimension of the environment. His personal interests were in urban form, the town as artifact, the urban design process, and comparative urbanism.

Lee Copeland and his wife Rolaine established this endowment in their names to support urban design at the University of Washington.

Lee Copeland is a nationally renowned architect and urban designer, who specialized in campus and civic design. He was Dean of the College of Architecture and Urban Planning (now the College of Built Environments) from 1972 to 1979, and Dean of the University of Pennsylvania Graduate School of Fine Arts (now PennDesign) from 1979 to 1991.

He was elected a Fellow in the American Institute of Architects in 1979, and won the AIA Seattle Chapter Medal in 2000. In 2001 he received the AIA/ACSA Topaz Medallion for Excellence in Architectural Education.

He is currently Principal Emeritus at Mithun.

The Myer R. Wolfe Endowment funds lectures by eminent figures in the field of urban design:

The Myer R. Wolfe Scholarship and Lee and Rolaine Copeland Endowed Fellowship in Urban Design are awarded to outstanding students in the University of Washington’s Urban Design Certificate Program, based on:

At the discretion of the Urban Design Program faculty, exemplary theses from students graduating from the Urban Design Certificate Program are awarded the Myer R. Wolfe Thesis Award. Previous winners include:

Email Neile Graham at ud@uw.edu with any questions about the Urban Design Program, or email Alexandra Haslam at alexeck3@uw.edu with questions about donations and how to support scholarships and other activities at the College of Built Environments.