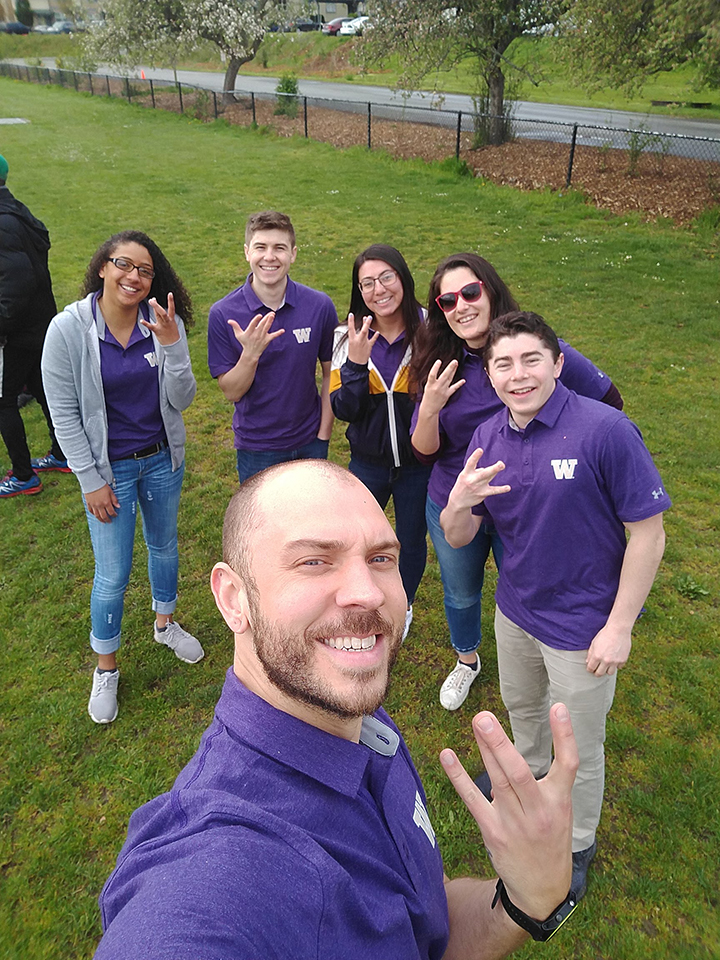 Students from the College of Built Environments’ Construction Management department are once again participating in the National Electrical Contractors Association (NECA) Green Energy Challenge. A team of six junior level students calling themselves “Husky Builders” are competing against teams from all over the county in this annual competition co-sponsored by Electri International. The team’s approach is that of an electrical contractor bidding on an upcoming job; they have been working for the past several months to suggest energy efficiency upgrades to an existing building in the Seattle area.

This year the team, comprised of Vanessa Sanchez, Renata Popov, Dumitru Robu, Sophia Grant, Zack Hinkley, and Cody Klansnic, have chosen to focus their project on the Magnuson Community Center located in Sand Point. Originally built in 1941 to serve as a recreation facility for U.S. Naval personnel stationed nearby, it is now a thriving community center. The facility is a hub for a variety of youth and adult events including theater productions, martial arts classes, and gardening workshops. The community center also serves as a host to afterschool programs utilizing the basketball and racquetball courts. The Green Energy Challenge team chose this facility because it had the perfect combination of size and age, allowing ample opportunities to suggest retrofit options to their lighting, insulation and HVAC systems in addition to a roof perfect for the installation of a photovoltaic system.

Points for the submitted proposal are awarded to competing teams based on a variety of factors including technical analyses on the existing energy usage of the building, a whole building lighting replacement option, and the installation of a photovoltaic system capable of helping the building achieve Net Zero energy consumption. The team performs a schematic level cost estimate, prepares a construction schedule and provides a financing plan with research in to the public and private incentives available to such energy conservation retrofit projects. Teams are also awarded points for volunteering with the organization and this year’s team helped to organize and set up an Easter egg hunt for the surrounding community. On April 20th, nearly seventy-five children ranging in age from 1 to 14 were treated to a well-stocked field of hundreds of candy-filled Easter eggs thanks in part to the efforts of this UW team. The event was a great success and future efforts by the team to assist the Magnuson Community Center are in development.

The NECA/Electri International Green Energy Challenge has been undertaken by numerous UW teams, resulting in several wins and many top 3 placements. With the help of the local electrical contracting industry including employees from Cochran Inc., Prime Electric, Artisan Electric and the Puget Sound NECA Board, this year’s team hopes to “bring home the gold” once again (not to mention the prize money that comes along with it). The final bid package is due on April 29 and, if that earns them one of the coveted top 3 spots, they go on to present in front of a panel of judges at the 2019 NECA Convention and Trade Show on September 17 in Las Vegas, NV. Good luck to the Husky Builders!