Preliminary data from a survey of food and housing insecurity at the University of Washington’s three campuses shows that an estimated 190 students may lack a stable place to live, and about one-quarter of students have worried recently about having enough to eat.

Results of the online survey, conducted by UW faculty in 2018, are still being finalized. But an early look provides estimates of the numbers of students who could be considered homeless, who rely on food banks or skip meals, and for whom the costs of housing and food clearly present a challenge as they try to obtain a college degree.

As students nationwide grapple with the costs of living — hundreds of colleges and universities, including the UW, provide some form of food pantry, emergency housing and other forms of assistance — University of Washington faculty and administrators have wanted to identify the scope of the problem on the Seattle, Tacoma and Bothell campuses. Officials say these initial results help establish a baseline for quantifying, and addressing, food and housing issues among the university’s nearly 55,000 undergraduate and graduate students.

The researchers will discuss some of these findings Friday at a workshop called Higher Ed on Homelessness: Collaborating for Change. The event, held at El Centro de la Raza in Seattle, is organized by the UW, Seattle University and Seattle Pacific University.

“As the cost of living increases, we are seeing more cases where – in addition to the normal stresses and challenges of completing a college education – some of our students are struggling to maintain stable living situations and reliable nourishment,” said Denzil Suite, UW’s vice president for Student Life.  “We certainly have a role in ensuring that our students are able to maintain these basic necessities, and we have taken important steps in that direction. These findings will help us not only assess the problem, but inform how we can continue to address it.”

Based on information contained in this study, the university will reconvene its task force on Food & Housing Insecurity to examine how to mitigate the challenges students are facing, Suite said.

“We must not romanticize the ‘starving student’ cliché,” said Lynne Manzo, an environmental psychologist, professor in the UW College of Built Environments and one of three faculty members who led the study. Nationwide, more low-income students are enrolling in college than students from middle-class families, a shift in demographics.

“We’re in an era now when we need to take those shorthanded scripts about poverty among students and look at them more seriously for the realities that students face, their vulnerabilities and what they need for their health and well-being,” Manzo said. “We need to rethink who our students are and what their needs are in a growing region that’s unaffordable.”

The idea for the survey began at a 2016 faculty summit hosted by Urban@UW, an interdisciplinary effort to tackle city issues through research, teaching and community collaboration. From that summit came the Homelessness Research Initiative (HRI), which connects faculty researchers involved in homelessness issues across the Seattle, Bothell and Tacoma campuses. HRI’s initiatives have supported faculty in their efforts to, for example, develop a multidisciplinary social change curriculum, and establish a safe community hub for social services and identifying housing- and food-insecure UW students. This study was initiated and implemented by the faculty researchers themselves under the umbrella of Urban@UW and with the help of partnerships across the three campuses. UW Housing and Food Services and President Ana Mari Cauce’s Emerging Priorities Fund provided some financial support for the analysis.

The confidential, voluntary survey, administered during February and March 2018, posed a series of questions about current, past-month and past-year living situations, access to food, strategies for obtaining adequate food and housing, and sources of financial support. Methods for assembling a study sample varied slightly by campus: At UW Tacoma, a survey link was sent to all students; at the Bothell and Seattle campuses, students were sent the link at random. These different sampling strategies were used to balance the needs of each campus with a rigorous research approach.

From those efforts, 5,440 undergraduate and graduate students ages 18 and older responded, a 20% response rate based on the number of students who received the survey. The majority of respondents were from the Seattle campus, with one-fifth from UW Tacoma and one-tenth from UW Bothell. Two-thirds of respondents were female, and fewer than half were white, non-international students.

Researchers then weighted the results statistically to project data proportionate to the entire tri-campus population (referred to as “population-level data”).

Rachel Fyall, an assistant professor in the Evans School of Public Policy & Governance and one of the study’s three investigators, said the results are still being finalized and interpreted. No one can say authoritatively, for example, exactly how many students are living in vehicles. But this estimate reflects the likelihood of such a circumstance, given the statistical extrapolation from the sample data, she said.

“It is clear that a minority of our university population is struggling,” Fyall said. “They may be better off than some of the nonstudent population who are struggling with housing and food insecurity, but it is undeniable that there are substantial unmet needs at the UW.”

Other key findings include:

Similar studies at other universities around the country have turned up a wide range of data on student homelessness and hunger. Fyall, Manzo and co-author Christine Stevens, an associate professor of Nursing and Healthcare Leadership Programs at UW Tacoma, explained that differences in methodology, such as who is included in the study sample or how questions are worded, can impact outcomes and make it hard to accurately compare one study to another.

The UW study, for instance, includes graduate students, which many other food and housing insecurity studies haven’t done, and means many responses could come from students who support partners and children, as well.

The survey also relied on the U.S. Department of Agriculture’s definition of food insecurity: the reduced quality, variety and desirability in a person’s diet, sometimes alongside lower food intake. Surveys elsewhere have asked about “hunger,” which can generate different kinds of responses and interpretations.

UW researchers see a bottom-line takeaway: Students are struggling — some severely — with a lack of affordable housing and a generally high cost of living, while trying to go to class and achieve their goals.

Stevens, who helped launch a food pantry at UW Tacoma five years ago, said those survival issues — where to live and whether to eat — affect student health and success. If you don’t eat, you can’t concentrate, and you don’t do well in school, Stevens said. If you’re working multiple jobs to pay tuition and your bills, then the jobs probably come first.

In addition to the food pantry, UW Tacoma has funded a full-time case manager to identify student needs and alert faculty to available resources to help students. Private donors support an emergency aid program that offers primarily cash assistance to students, and the campus recently collaborated with the Tacoma Housing Authority and a private developer on a property-subsidy program to get homeless students into housing.

UW Bothell also has an emergency aid program, and a food pantry in two locations, one on campus and the other in student housing. New this school year is a Health and Wellness Resource Center, which, among other services, connects students with one-time rental assistance and helps them enroll in the federal Supplemental Nutrition Assistance Program.

And on the Seattle campus, efforts to address food and housing insecurity have extended to both the campus population and to young people in the surrounding neighborhood. 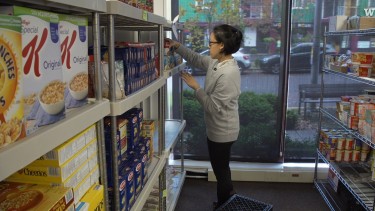 The Any Hungry Husky food pantry opened a permanent location on the west side of the UW Seattle campus last fall. Kiyomi Taguchi/U. of Washington

After a significant increase in the number of student visits from one academic year to the next, the Any Hungry Husky program last fall expanded and made permanent its food pantry. Both the campus and partner organizations in Seattle’s University District have hosted quarterly pop-up events — part social service fair, part pay-as-you-can café — through The Doorway Project, an effort led by Josephine Ensign, a professor in the UW School of Nursing, and supported by the Homelessness Research Initiative.

“The health and welfare of our students is our primary concern. That starts with reliable housing and access to food,” Suite said. “This survey deepens our ongoing effort to fully understand the need that exists, and we are committed to reviewing and updating our efforts to support our students in the years to come.”